Help! Next weekend, if all goes according to plan, my sister and I are getting our families together for Sunday Brunch. While I’ve got most of the recipes in place and have a rough plan, I can’t decide on a few new dishes.

We decided having a Brunch was better than a barbecue because it would start earlier in the day and still leave all the working-folk plenty of time to prepare for that dreaded Monday Morning Mayhem. My sister has little ones, so whatever we do for Brunch, it has to be kid-friendly. I’m planning to bring an assortment of good-quality (although be it store-bought) pastries. Sis is talking scrambled eggs and pancakes. I’m thinking sausage and bacon – that’s a gimme since both travel well. (Sis is hosting, so I’ll be working in an unfamiliar kitchen).  Apple and orange juice, French Pressed Coffee and maybe Mimosa for the “big people”. Fresh fruit with a dollop of fresh whipped cream is always a nice touch.

When I think “Brunch” I think Continental Breakfast (Pastries; Fruits; Juice & Coffee) meets American (Scrambled Eggs, Bacon, Sausage, Home-Fry Potatoes, Pancakes and/or Waffles) with a few “extras” thrown in for variety and elevation above the ordinary (Quiche, Frittata or Stratas). What do you think when you think “Brunch”?

The recipes that follow I have not made before, but I am considering as part of our Brunch Selection. What I really need from you is a little input – what would you make? All – one – none?

Beat together eggs, milk, wine, onions, mustard and peppers until foamy. Divide and pour over bread mixture. Cover with foil and refrigerate over night.

Remove from refrigerator 30 minutes prior to baking.

Bake covered casseroles for 1 hour or until set. Remove from oven, spread sour cream over casseroles and sprinkle with parmesan cheese. Bake an additional 10 minutes or until crusty brown.

I love the look and presentation of the torte – the multi steps and detailed directions seem a bit overwhelming. 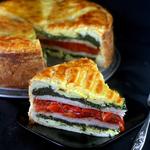 Tourte Milanese
Ingredients – For The Shell
1 pound puff pastry, chilled – homemade or store-bought.  (If using store-bought, roll both sheets together for 1 lb, then cut off a 1/4 lb for the top of the torte. Use any scraps to cut out designs for the top, if desired.)

DIRECTIONS:
Prepare the pastry: Generously butter an 8 1/2-inch springform pan. Cut off one-quarter of the pastry, cover, and set aside. Roll out remaining puff pastry on a lightly floured work surface to a 1/4-inch thick round. Carefully fit the pastry into the pan, pressing to get a smooth fit, leave a 1-inch overhang. Roll out the smaller piece of pastry until it is 1/4 inch thick. Cut out an 8-inch circle of dough for the top of the torte and lift it onto a plate or baking sheet. Cover both the crust and the lid with plastic wrap and refrigerate while you prepare the filling. If using scraps for cut-out designs, like leaves, place the cut-outs on a separate plate, cover with plastic wrap and chill in fridge along with top and lined springform pan.

Make the Eggs: Whisk eggs, herbs, salt and pepper together. Melt the butter in a large skillet over low heat and pour in the eggs. Gently but constantly stir the eggs around in the pan, pulling the eggs that set into the center of the pan. Slide the eggs onto a plate, without mounding them, and cover immediately with plastic wrap. You want a loose, soft scramble since the eggs will be baking for a little over an hour.

Roast the peppers: place whole and untrimmed, directly over the flame of a gas burner. As soon as one portion of a peppers skin is charred, turn the pepper. When black and blistered all over, drop into a bowl…cover with plastic wrap and let steam (I throw them all in a paper or large zip-lock bag and seal it shut) for about 20 minutes. Use your fingers to rub off skin – DO NOT rinse under water, you lose flavor. Cut each pepper once from top to bottom, cut away the stem, open the peppers, and lay them flat. Trim away the inside veins and discard the seeds; season peppers with salt and pepper and set aside, covered, until needed.

Alternatively, lay the peppers on a baking sheet and place them under the broiler, turning them as each side chars Then continue to skin and seed them as instructed above.

The peppers release a lot of liquid once roasted. Make sure the peppers are dry (blot with paper towels) before adding them to the tourte.  Cut up the roasted peppers because sometimes you end up with big or whole pieces pulling out with each forkful.

Cook the spinach: in a large quantity of boiling salted water for 1 minute to blanch it. Drain spinach in a colander, rinse with cold water, and press it to extract all of the excess moisture. Heat the oil, butter, and garlic in a large skillet over medium heat. Add blanched spinach and sauté for 3 minutes. Season with salt, pepper, and nutmeg, and add a little heavy cream. Bring quickly to the boil and stir so it mixes with the spinach. Remove the spinach from the skillet with a slotted and set aside. Once it’s cooled, squeeze as much liquid out before adding it to the tourte.

Assemble the Torte: Remove the pastry-lined springform pan from the refrigerator and layer the filling ingredients in the following order: (quick tip: Sprinkle a little dry bread crumbs or grated Italian hard cheese on the bottom of the raw crust before adding first layer of scrambled eggs to protect against a soggy bottom crust).

Half the eggs
Half the spinach
Half the ham
Half the cheese
All the roasted peppers, laid flat

With each layer, make certain that the ingredients are spread to the edge of the pan. Fold the excess crust in over the filling, and brush the rim of crust you’ve created with the egg wash. Center the rolled-out top crust over the torte and gently push the edge of the top crust down into the pan, pressing and sealing the top and bottom crusts along the sides. Brush the top with the egg wash and cut a vent in the center of the crust. Use the point of the knife to etch a design in the top crust, taking care to cut only halfway into the dough. Chill the fully loaded tourte for 30 minutes to 1 hour before baking.

Position a rack in the lower third of the oven and preheat oven to 350 degrees 20 minutes prior to baking.

Bake the Torte: Place the torte on a jelly-roll pan, give it another coat of egg wash, and bake it for 1 hour 10 minutes, or until puffed and deeply golden. Remove from the oven and let rest on a rack until it reaches room temperature. Run a blunt knife or offset spatula around the edges of the pan and release the sides. Let cool for 20 – 30 minutes before cutting. I let it cool for 1 hour before cutting because it still felt like it would fall apart upon cutting, after 30 minutes. 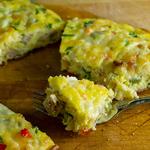 Basic Frittata With Sausage & Bell Peppers
8 Eggs, beaten
1/2 Green Pepper, chopped
1/2 Red Pepper, chopped
1/2 Onion, chopped
2 links Sausage, cooked, cubed and cooled
1/3 cup Cheddar Cheese, shredded
1 tsp Butter
Salt and Pepper
Preheat oven to broil setting.
Mix together eggs in a medium bowl.
Heat a 12 inch non-stick saute pan over medium high heat. Add butter to pan and melt, then add onions and saute for about 2 to 3 minutes. Pour in the eggs and add the peppers and sausage… mix everything well. Season with salt and pepper.
Cook for about 4 to 5 minutes or until the top is starting to set. Sprinkle cheese evenly over top and put in oven to broil for about 3 to 4 minutes or until the top has set and cheese has melted.
Slice and serve!
Original Recipe: http://www.poormet.com/basic-frittata/
************ 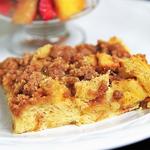 Baked French Toast with Streusel Topping
French Toast
1 loaf sourdough bread, cut into 1-inch pieces
6 eggs
1½ cups whole milk
½ cup half and half
½ cup sugar
1 tablespoon vanilla
1 teaspoon ground cinnamon
pinch of salt
Streusel Topping
½ cup all-purpose flour
¼ cup brown sugar
1 teaspoon ground cinnamon
½ stick butter, diced
Spray a 13×9 baking dish with non-stick cooking spray or butter liberally. Add bread cubes to baking dish and distribute evenly.
In a large bowl, whisk together eggs, milk, half and half, sugar, vanilla, cinnamon and pinch of salt. Pour over bread cubes. Press bread cubes into the baking dish to make sure they absorb custard.
Cover baking dish tightly with plastic wrap and refrigerate overnight.
In a small bowl, mix together ingredients for the streusel topping being sure to break up butter into small pieces. Cover tightly with plastic wrap and refrigerate overnight.
When ready to bake, preheat oven to 350 degrees Fahrenheit. Remove baking dish and streusel topping from the refrigerator. Sprinkle streusel topping liberally over the top of the French toast.
Bake 45 minutes. Remove from the oven and allow to rest for about 3 minutes before serving.
Serve warm with maple syrup.
Original Recipe: http://addapinch.com/cooking/2012/11/16/baked-french-toast-recipe/#.uncf4vljoag
************
I thank you all in advance for your thoughts and ideas . . .

2 thoughts on “Calling on Home Cooks for Sunday Brunch Ideas”