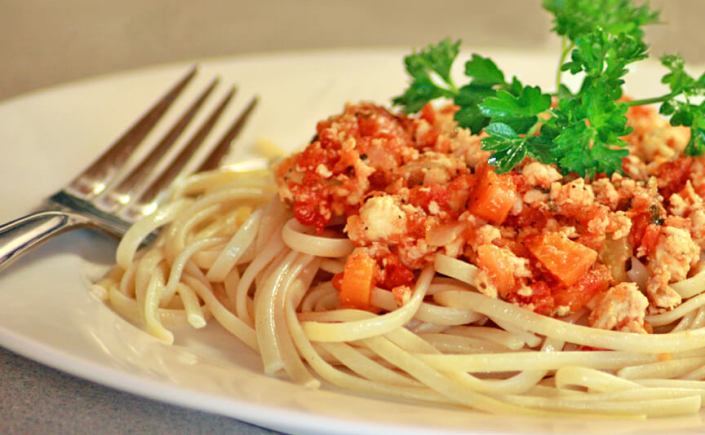 Panchetta is Italian Bacon, of sorts. Both American Bacon and Italian Pancetta are pork, usually from the pork belly section. Typically both have been cured (while some bacon is sold uncured). Bacon is cured in salt, either in a brine or packed in salt. It is then aged by drying the meat, be it dried in cold air for weeks or even months, or smoked (my favorite kind of bacon). Pancetta can also be cured in simple salt, but seasonings and other aromatics are often added to the curing process to infuse Pancetta with its distinctly Italian flavors. While this recipe can be made using Bacon, depending upon the type of bacon, the flavor will vary.

The second point of conversation needs to be the very concept of Spaghetti Bolognese, a dish not found in Italy. That is not to say Bolognese isn’t Italian – it most certainly is, just not served over a mound of round Spaghetti noodles. Here in America, we equate Italy with Spaghetti as though no other pasta existed. The truth of the matter is that in Italy, Spaghetti noodles are not used in a Bolognese, and for good reason. Spaghetti is round. Tagliatelle is typically the pasta of choice. The long, flat noodles lend themselves beautifully to any sauce. Just as you won’t find Spaghetti Bolognese in Italy, the idea of Spaghetti with Meatballs is a foreign concept. (As is – surprise – Ham and Pineapple Pizza!) There are many dishes that are found in American-Italian restaurants that you won’t find in Italy. That isn’t to say these dishes aren’t delicious, they are. However; American-Italian cuisine isn’t the same as true Italian cuisine.

I am at my very roots, an American home-cook with some heavy Southern influences in the kitchen. While I like my dishes to be as “authentic” as possible when exploring the world through what I cook, there are certain liberties that are sometimes taken. My guys love Spaghetti with just about anything, and so a lot of the my authentic Italian sauces are not generally served over the correlating pasta of choice in Italy. I feeling is, if it is what you like, go for it authentic or otherwise.

For that matter, in Italy you would not find Chicken in a Bolognese, so we are taking all kinds of liberty with this dish. What makes this recipe Bolognese in spirit? It is the use of carrots, celery, tomatoes and cream in a sauce that has been kissed with wine. While Bolognese is usually made with a red meat and incorporates a red wine, since this dish utilizes a milder meat in the sauce, the red wine has been replaced with a fortified white wine to enhance rather than dominate the flavor.

For a “red” sauce that is more in keeping with a true Ragu Bolognese, see my recipes for Classic Ragu Bolognese with Beef, Veal and Pancetta or Fettuccine Bolognese (That’s Inexpensive and Easy to Make).

This wonderful, lighter version of Spaghetti Bolognese was inspired by Kimberly at The Darling Gourmet. Her blog is an absolute delight – an invitation to tour the world through taste. I’ve included a link to her original recipe at the bottom of the page.

Peel garlic and set aside until ready to press into the dish.

Over medium-high heat, melt butter with olive oil. Take care not to allow butter to burn. Once the butter has melted and is hot, add the bowl of finely chopped vegetables. Saute the vegetable mixture until softened, about 6 minutes.

Press garlic into the sauteed vegetables and cook another 30 seconds or so until aromatic.

Add ground chicken to the pan, breaking it into small pieces as it cooks. Cook for about 5 minutes or until no pink is remaining.

Add Panchetta and cook for about 2 or 3 more minutes.

Increase the cooking temperature to high, add wine and let everything come to a full boil for about 2 minutes.

Add canned tomatoes with their juices, chicken stock, Rosemary and Thyme. Let sauce return to a boil, then reduce the heat to low and simmer the pot, uncovered, for about an hour, until the sauce has thickened slightly.

Bring a large pot of water to a full, rapid boil. Add a pinch of salt to the water to increase boiling temperature.

Add pasta to the boiling water. Cook according to package directions, stirring the pasta to prevent sticking as it cooks.

While the pasta is cooking, add the cream, Parmesan cheese and basil to the sauce. Gently stir well to incorporate the creamy textures and fresh herbs to the sauce. Taste and season with salt and pepper as needed.

To serve: Drain pasta (but do not rinse), shaking off any excess moisture. Empty pasta into a large, rimmed serving platter or large bowl. In another large bowl, empty sauce. Incorporate pasta with sauce at the table, served family-style. Garnish plates with a little parsley for some added color.
well.

NOTE: As with most pasta sauces, this will intensify in flavor with age. The sauce can be made up to two days before serving to let all the flavors marry. Simply warm the sauce gently as the pasta cooks.

One thought on “Spaghetti Bolognese with Chicken and Pancetta”